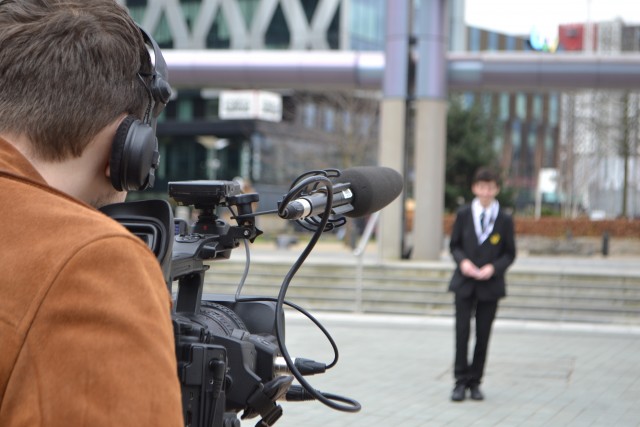 The big aim of Mixital's Digital Day in Media City - as part of School Report’s News Day 2017 in March - was to galvanise children from being media consumers to media creators. So although Year 9 pupils from Rawmarsh Community School and Whickam Academy looked like they were enjoying the ultimate escape from the classroom, this was to be no holiday.

They were under time pressure from the start; tasked with coming up with ideas to illustrate the theme of the day ‘Health and Well-being'. The aim was to design a whole Mixital web-site as well as the content to go into it, and it all had to be launched by 3pm.

Mixital's Jon Howard said, "We're trying to inspire a nation of children to get creative with their stories. It's really important they learn these skills because it'll allow them to flourish with their creativity in the future."

Jon first gave the children a brain warm-up to start them thinking creatively. Then it was time to plan a script for a short video and then go and film it. Each group was helped by a professional BBC video journalist with a camera. One group took the slogan "Sport for sport" and wrote pieces to camera saying that sport shouldn't just be about promoting yourself. Another group had themselves filmed running through the trees and giving health advice to camera. They all soon realised how hard it can be to speak to camera and remember what you want to say at the same time!

Back inside, the pupils sat with their mentors and watched the films being edited. They also had to choose photographs from the web and write copy to go with their stories.

Jon Howard argues that putting together these little campaigns are an effective way for the children, not only to learn about the media, but to learn about health and how to reduce stress in a way they will remember.

"It's better to learn from doing rather than just studying from books. It's really good to get out and make something and then watch it flourish."

The results were impressive and who knows whether any of the young people will come to remember this day as their first step into a career in media. 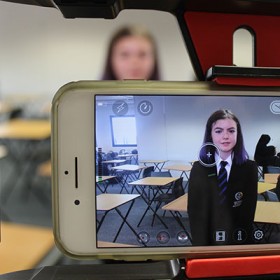 What will be your future digital career?